Solenn Heussaff is a Filipina-French VJ, actor, television show host, model, singer, fashion designer, painter, and professional make-up artist. She made it to the Final Three as one of the official castaways of Survivor Philippines: Celebrity Showdown which aired from August 30 to December 3, 2010 on GMA Network. In December 2010, Heussaff signed a recording contract with MCA Music, a movie contract with Regal Entertainment, and a television contract with GMA Network and GMA Artist Center. She won a Box-Office Entertainment Award in 2012 for Most Promising Female Star of the Year. In 2014, Heussaff played Ella in the indie film “Mumbai Love” opposite Kiko Matos. 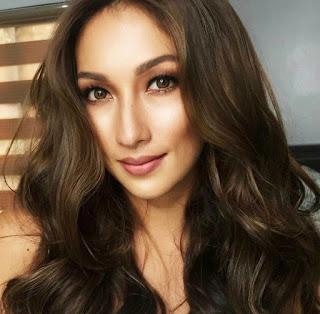 Born Solenn Marie Adea Heussaff on July 20, 1985 in Makati City, Philippines, to parents Cynthia Adea, a Filipina, and Louis Paul Heussaff, a French Marine, she is the middle child of three and has an older sister and a younger brother. Heussaff graduated from Eurocampus and studied fashion design in Paris for three years. She married Nico Bolzico in May 2016. Together they have one daughter, Thylane Katana Bolzico.

Solenn Heussaff Facts:
*She was born on July 20, 1985 in Makati City, Philippines.
*She is of French descent on her father’s side, and of Filipino descent on her mother’s side.
*She has an older sister named Vanessa and a younger brother named Erwan.
*She owns several pets with her husband namely, El Gato (cat), Pochola (dog), Patato and Pechuga (tortoise).
*Visit her official website: www.solenn.ph
*Follow her on Twitter, YouTube, Facebook and Instagram.