Stefanos Tsitsipas is a Greek professional tennis player who achieved a career-high singles ranking of World No. 5 on August 5, 2019, making him the highest-ranked Greek player in history. He was the champion at the 2019 ATP Finals, becoming the youngest winner of the year-end championships in eighteen years. Turning professional in 2016, Tsitsipas has won seven ATP singles titles. 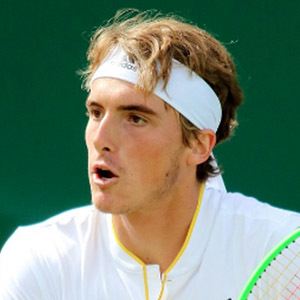 Born on August 12, 1998 in Athens, Greece, his mother, Julia Apostoli, was a professional on the Women’s Tennis Association (WTA) tour and his father, Apostolos Tsitsipas, was trained as a tennis coach. He has three younger siblings: two brothers named Petros and Pavlos (Paul), and a sister named Elisavet. All of his siblings are also tennis players.

Stefanos Tsitsipas Facts:
*He was born on August 12, 1998 in Athens, Greece, into a tennis family.
*He is of Greek descent on his father’s side and Russian descent on his mother’s side.
*He was introduced to the sport at age three and began taking lessons at age six.
*As a junior, he was ranked No. 1 in the world.
*He turned professional in 2016.
*He is the youngest player ranked in the top 10 by the Association of Tennis Professionals.
*He won his first ATP match in late 2017.
*He is fluent in both Greek and Russian.
*Visit his official website: www.stsitsipas.com
*Follow him on Twitter, YouTube, Facebook and Instagram.