Sue Ramirez is a Filipina actress and singer. She is best known for the television work on series such as Angelito: Batang Ama, Angelito: Ang Bagong Yugto, Annaliza, Pangako Sa ‘Yo, Dolce Amore, La Luna Sangre and Hanggang Saan. Sue has also appeared in such films as Aswang, Just The Way You Are, The Debutantes, Meant to Beh: Ika-something na Utos, and Ang Babaeng Allergic sa WiFi. For her work in Just the Way You Are, she earned a New Movie Actress Nomination in the 32nd PMPC Star Awards for Movies. Born Sue Anna Garina Dodd on July 20, 1996 in Parañaque City, Philippines, to Concepcion and James Peter Dodd, she is the youngest child in her family alongside her three sisters and one brother, James Dodd. Her father was a officer in the US state department and her mother, a company vice president. She was educated in Sacred Heart School in Parañaque. Playing the role of Nicole Matias, she began her acting career in the ABS-CBN remake of Mula sa Puso. 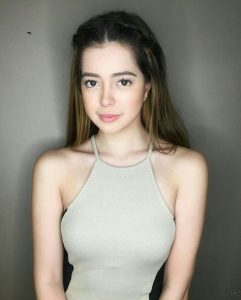 Sue Ramirez Facts:
*She was born on July 20, 1996 in Parañaque City, Philippines.
*She is the youngest of five children.
*Her father is an American citizen, and was a officer in the US state department.
*She played Driana Sison in the 2015 film Just the Way You Are, alongside Enrique Gil and Liza Soberano.
*Follow her on Twitter, Facebook and Instagram.