Sutton Foster is a Tony Award-winning American actress, singer and dancer known for her work on the Broadway stage. She has played starring roles in Thoroughly Modern Millie as Millie Dillmount, Anything Goes as Reno Sweeney, The Drowsy Chaperone as Janet Van de Graaf, Young Frankenstein as Inga, Violet as Violet Karl, Shrek the Musical as Princess Fiona, and Little Women as Jo March. She won two Tony Awards for Best Performance by a Leading Actress in a Musical for her Performances in Thoroughly Modern Millie (in 2002) and Anything Goes (in 2011). On television, Sutton starred as Michelle Simms in the ABC Family short-lived comedy-drama series Bunheads from 2012 to 2013, and currently stars as Liza Miller on the TV Land comedy-drama series Younger. Born Sutton Lenore Foster on March 18, 1975 in Statesboro, Georgia, to parents Helen and Bob Foster, she grew up in Troy, Michigan. She is the younger sister of actor Hunter Foster. She got her breakthrough at the age of 15 after she appeared in a reality show competition, Star Search. She has been married to Ted Griffin since October 25, 2014. They have an adopted daughter, Emily Dale Griffin. She was previously married to actor Christian Borle from 2006 to 2010. 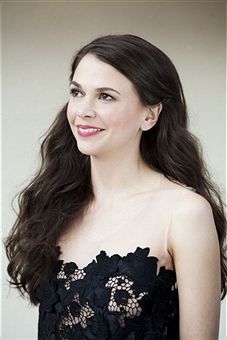 Sutton Foster Facts:
*She was born on March 18, 1975 in Statesboro, Georgia, USA.
*She was a contestant on the reality competition show Star Search at the age of 15.
*She won two Tony Awards for best actress in 2002 and 2011.
*She released her debut studio album, Wish in February 2009.
*She has three pet dogs, Brody, Mabel, and Linus.
*Visit her official website: www.suttonfoster.com
*Follow her on Twitter, YouTube, Facebook and Instagram.