Sylvie Meis is a Dutch model and television personality who came to prominence through assignments at FoxKids and music station TMF. She has hosted several events at TMF, such as presenting the annual TMF-awards, and conducting interviews with international artists such as Kylie Minogue and Britney Spears. Meis served as a judge on Das Supertalent, the German version of Simon Cowell’s Got Talent series between 2008 and 2011. In 2010, Meis appeared in the third season of the German equivalent of Strictly Come Dancing, called Let’s Dance. Born Sylvie Françoise Meis on April 13, 1978 in Breda, Noord-Brabant, Netherlands to parents Rita and Ron Meis, she has a brother named Daniel. She graduated from the University of West Brabant. He married Dutch soccer player Rafael Van der Vaart in 2005, and the couple had a son named Damián in 2006 before getting divorced in 2013. 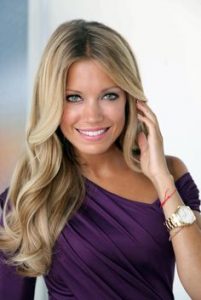 Sylvie Meis Facts:
*She was born on April 13, 1978 in Breda, Noord-Brabant, Netherlands.
*She is a graduate of the University of West Brabant (Dutch: Hogeschool West-Brabant).
*She was named the Netherlands’ Sexiest Female in 2003.
*She hosted the 2008 FIFA World Player of the Year award ceremony.
*She was diagnosed with breast-cancer in May 2009.
*She is fluent in Dutch, English, and German.
*Visit her official website: www.sylvie-meis.com
*Follow her on Twitter, YouTube, Facebook and Instagram.