Tamera Mowry is an American actress and model best known for role as Tamera Campbell on the ABC/WB sitcom Sister, Sister alongside her identical twin sister Tia Mowry. She played Dr. Kayla Thornton in the medical TV series, Strong Medicine. She was born Tamera Darvette Mowry on July 6, 1978, two minutes before her twin sister, Tia Mowry-Hardrict, in Gelnhausen, Hesse, Germany. Her father, Timothy Mowry, is of English descent and her mother, Darlene Mowry, is of Bahamian descent. She married her boyfriend of 6 years Fox News Correspondent Adam Housley on May 15, 2011. They have two children; son, Aden, and daughter, Ariah. 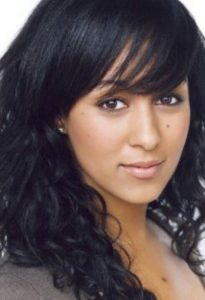 Tamera Mowry Facts:
*She was born at 4:30 P.M., two minutes before Tia.
*She has collaborated with Tia to establish their own production company named, “Twilight Production.”
*She didn’t lose her virginity till the age of 29 due to her devout Christian faith. After losing her virginity she felt guilty, so decided to remain celibate till her marriage.
*She can be identified from her sister, Tia, by the mole on her cheek.
*Her mother serves as her children’s manager.
*She became a co-host on the Fox talk show The Real In 2014.
*Friends with Loni Love, Adrienne Bailon, Jodie Sweetin, Jeannie Mai, and Ayesha Curry.
*Follow her on Twitter, Facebook, Pinterest, and Instagram.