Tia Mowry is an American actress and model who first came to prominence with her role as Tia Landry on the ABC and WB drama series, Sister, Sister alongside her identical twin sister Tamera Mowry. She then played medical student Melanie Barnett in the comedy-drama series The Game. Born Tia Dashon Mowry in Gelnhausen, Hesse, she is the daughter of Timothy Mowry and Darlene Mowry. She has three siblings, a twin sister Tamera and two younger brothers Tahj and Tavior. She has been married to Cory Hardrict since April 2008. Together they have one son, Cree Taylor Hardrict. 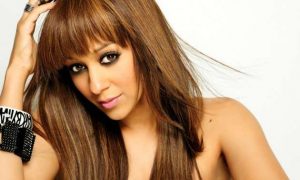 Tia Mowry Facts:
*Her father is English-American and her mother is Bahamian-American.
*She is the twin sister of Tamera Mowry-Housley.
*She was born at 4:32 P.M., two minutes after Tamera.
*She has been a vocal advocate of the vegan lifestyle and has even starred in PETA’s vegan promotion campaign.
*She is friends with Loni Love, Adrienne Bailon, and Jeannie Mai.
*Follow her on Twitter, Facebook and Instagram.