Taraji P. Henson is an African-American actress known for her roles as Yvette in Baby Boy, Shug in 2005 independent drama film Hustle & Flow and Queenie in the 2008 romantic fantasy drama film The Curious Case of Benjamin Button, for which she was nominated for an Academy Award for Best Supporting Actress in 2009. She is also known for playing the lead role as Cookie Lyon in the Fox’s drama series Empire since 2015. Taraji was born on September 11, 1970 as Taraji Penda Henson in Washington, District of Columbia, USA, the only child of Bernice, a corporate manager at Woodward & Lothrop, and Boris Lawrence Henson, a janitor and metal fabricator. 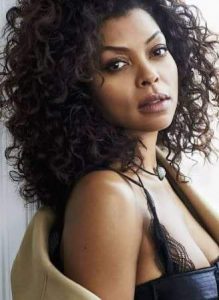 Taraji P. Henson Facts:
*She is an only child.
*The father of her only son died unexpectedly in 1997.
*She had a nickname ‘Cookie’ in college.
*She was nominated for her first Academy Award in 2008.
*Black Men Magazine readers voted her one of “The 10 Sexiest Women of 2001”.
*She is close friend with Mary J. Blige, Anthony Anderson, Common, and Taye Diggs.
*Follow her on Twitter, Facebook and Instagram.