Teresa Scanlan is an American beauty pageant titleholder who was crowned Miss Nebraska 2010 and Miss America 2011. She was the first titleholder from Nebraska to win Miss America, Miss USA, or Miss Teen USA. In August 2016, Scanlan became one of the guest judges in the final Miss Earth United States 2016 pageant in the Schlesinger Concert Hall, Alexandria, Virginia. She has also served as a national judge and emcee for the USA National Miss Scholarship Pageant. Born Teresa Michelle Scanlan on February 6, 1993 in Colton, California, to parents Mark and Janie Scanlan, she grew up in Gering, Nebraska. She is of Croatian descent. She was home-schooled until her junior year of high school, where she began attending Scottsbluff High School. In 2010, she graduated from Scottsbluff High School. She was married to Connecticut automobile dealer John Mocadlo from 2015 to 2016. 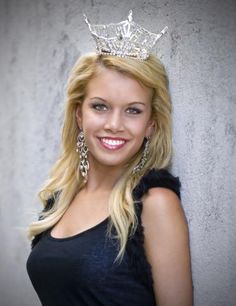 Teresa Scanlan Facts:
*She was born on February 6, 1993 in Colton, California, USA.
*Her maternal grandparents immigrated to the United States from Ilovik, Croatia
*She was crowned Miss Nebraska 2010.
*She won Miss America 2011 at age 17, becoming the youngest Miss America since Bette Cooper in 1937.
*She enjoys singing, dancing, acting, playing piano and guitar, composing songs, and baking.
*Visit her official website: www.teresascanlan.com
*Follow her on Twitter, YouTube, Facebook and Instagram.