Terry Crews is an American actor and former NFL player. He is known for playing Julius on the UPN/CW sitcom Everybody Hates Chris and for his appearances in Old Spice commercials. He is also known for his roles in such films as Friday After Next, Bridesmaids, Blended, Idiocracy, White Chicks and The Expendables series. Born Terrence Alan Crews on July 30, 1968 in Flint, Michigan, to Patricia Crews and Terry Crews, Sr., he grew up in a strict Christian household in Flint. He attended Western Michigan University, where he played football. He spent a handful of seasons in the NFL, appearing in 32 games from 1991 to 1995. He has been married to Rebecca Crews since July 29, 1990. They have five children, four girls and a boy. 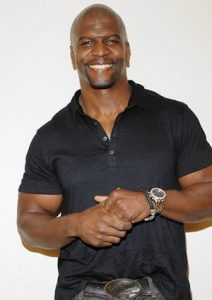 Terry Crews Facts:
*He was raised by his mother.
*His father was an abusive alcoholic.
*He is the uncle of actress Storm Ascher.
*He is an accomplished flautist.
*He was on the NBC celebrity reality competition Stars Earn Stripes.
*Visit his official website: www.terrycrews.com
*Follow him on Twitter, YouTube, Google+, Facebook and Instagram.