Tianna Bartoletta is an American track and field athlete. She competes in the long jump and short sprinting events and is a two-time Olympian with three gold medals in 2012 and 2016. At the 2012 Summer Olympics Bartoletta placed fourth in the 100m race then won her first gold Olympic medal by leading off the world record-setting 4×100m relay team. At the 2016 Summer Olympics she won two more golds, first with a personal best to win the long jump then again leading off the victorious 4×100m relay team. Bartoletta won two gold medals in the long jump at the World Championships in 2005 and 2015. She also won three medals from the World Indoor Championships: one gold in the long jump in 2006 and two bronze in the 60 m in 2012 and 2014. Bartoletta was named to the U.S. National bobsled team in October 2012. Born Tianna Madison on August 30, 1985 in Elyria, Ohio, to parents Jo Ann and Robert Madison, she attended Elyria High School. Bartoletta was a member of the 2003 USA TODAY All-USA High School Girls Track Team, as well as her high school basketball and track teams. Since 2012, she has been married to John Bartoletta. 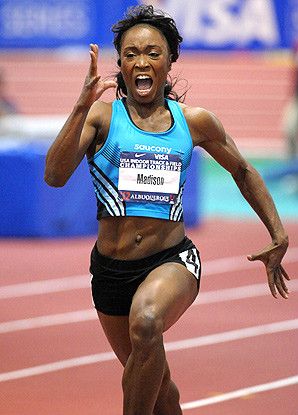 Tianna Bartoletta Facts:
*She was born on August 30, 1985 in Elyria, Ohio, USA.
*Her parents are Jo Ann Madison and Robert Madison.
*She was named a 2002 American Track & Field Outdoor All-American.
*She was a member of the 2003 USA Today All-USA High School Girls Track Team.
*She is the founder and president of Club 360, a program helping young women build successful lives by enabling them to broaden their experiences and make educated decisions.
*Follow her on Twitter and Instagram.