Tom Felton is an English actor and musician. He is best known for his role as Draco Malfoy in the Harry Potter film series. He was a series regular on the 2018 sci-fi series Origin and appeared as Laertes in Claire McCarthy’s Ophelia. He also portrayed the villain in family-horror A Babysitter’s Guide to Monster Hunting. 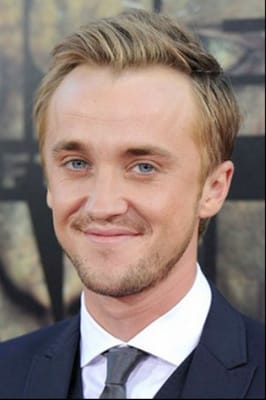 Born Thomas Andrew Felton on September 22, 1987 in Epsom, United Kingdom, to parents Sharon and Peter Felton, he is the youngest of four children. He has three older brothers; Ashley, Jonathan, and Chris. He attended Cranmore School in West Horsley, Surrey, UK until the age of 13, and graduated from The Howard of Effingham School in Leatherhead, South East England. Felton began appearing in commercials and made his screen debut in the role of Peagreen Clock in The Borrowers. He has dated actress Phoebe Tonkin and Jade Olivia aka Jade Gordon.

Tom Felton Facts:
*He was born on September 22, 1987 in Epsom, United Kingdom.
*He started singing in a church choir at the age of 7 and has been a member of four choirs at school.
*He has been acting since he was 8 years old.
*He starred as antagonist Draco Lucius Malfoy in all the 8 movies of the Harry Potter series, alongside Daniel Radcliffe, Emma Watson and Rupert Grint.
*He won a MTV Movie Award for Best Villain in the film version of Harry Potter and the Half-Blood Prince in 2010.
*Likes hip-hop and acoustic-based music claiming Jack Johnson, Jason Mraz, John Mayer, and Eminem as inspiration.
*He got his driving license after turning 17 and got the test clear after three attempts.
*He enjoys football (soccer), basketball, cricket, ice-skating, rollerblading, swimming, tennis, and fishing.
*He has two tattoos; a dog on the inside of his right bicep and palm trees on the inside of his right ankle.
*Visit his official website: www.tomfelton.com
*Follow him on Twitter, Facebook and Instagram.