Zachary Quinto is an American actor and producer. Quinto is best known for his roles as the character Sylar in the television series Heroes, Spock in the film Star Trek and its sequels Star Trek Into Darkness and Star Trek Beyond, Charlie Manx in the AMC series NOS4A2, as well as his Emmy nominated performance in American Horror Story: Asylum. He has also played prominent roles in the films Margin Call, What’s Your Number?, Hitman: Agent 47, Snowden, and Hotel Artemis. He also appeared in smaller roles on television series such as So NoTORIous, The Slap, and 24, and on stage in Angels in America, The Glass Menagerie, and Smokefall. 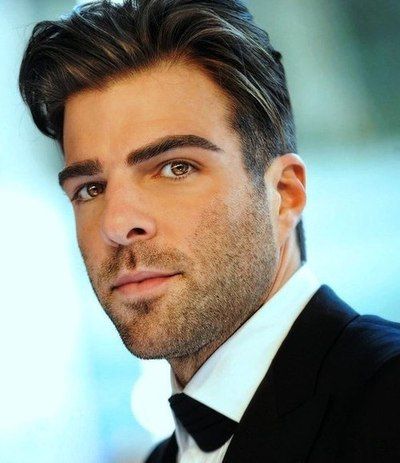 Born Zachary John Quinto on June 2, 1977 in Pittsburgh, Pennsylvania, to parents Margo and John Quinto, he is of Italian descent on his father’s side, and of Irish descent on his mother’s side. He has one older brother named Joe. Zachary graduated from Central Catholic High School in Pittsburgh, with the class of 1995, and graduated from Carnegie Mellon University’s School of Drama in 1999. He dated fellow actor Jonathan Groff during 2012 till spring 2013, and model and painter, Miles McMillan from 2013 to 2019.

Zachary Quinto Facts:
*Born on June 2, 1977 in Pittsburgh, Pennsylvania, he grew up Catholic.
*His father died of cancer when Quinto was seven years old.
*He survived a serious car accident when he was age 16.
*He played Spock in the 2009 movie Star Trek and the 2013 movie Star Trek Into Darkness.
*He starred as Sylar in the television series Heroes from 2006 to 2010.
*He is a supporter of LGBT rights and other causes.
*He is close friends with Karl Urban, Kristen Bell and Chris Pine.
*He is best friends with Milo Ventimiglia.
*He was named People magazine’s Sexiest Man Alive in 2007.
*He publicly revealed that he is gay in October 2011.
*Visit his official website: www.zacharyquinto.com
*Follow him on Twitter and Instagram.