Anthony Dominick Benedetto, better known by his stage name Tony Bennett, is an American singer, best known for his renditions of show tunes, performing standards, jazz, and his popular song, “I Left My Heart in San Francisco.” He was born on August 3, 1926 as Anthony (Antonio) Dominick Benedetto in Astoria, Queens, New York, to seamstress Anna Suraci and grocer John Benedetto. He married Patricia Beech in 1952, Sandra Grant in 1971, and then Susan Crow in 2007. He has four children, two daughters, Antonia and Joanna and two sons, Danny and Dae. 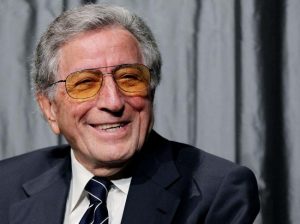 Tony Bennett Facts:
*His real surname is Benedetto: “blessed one” in Italian.
*His mother was a seamstress, his father was a grocer, and his uncle was a tap dancer.
*He served during the Second World War and then developed a career spanning over half a century.
*His favorite movie is The Treasure of the Sierra Madre (1948).
*He is lifelong supporter of the Democratic Party.
*He was nearly died after overdosing on cocaine in 1979.
*Follow Tony Bennett on Twitter, YouTube, Facebook, Myspace, and Instagram.