Tony Stewart is an American semi-retired professional stock car racing driver and current NASCAR team owner. He is a three-time NASCAR Cup Series champion as a driver, winning titles in 2002, 2005 and 2011. As a team owner, Stewart has won NASCAR Cup titles in 2011 with himself and in 2014 with Kevin Harvick as drivers. Throughout his racing career, he has won racing titles in Indy, midget, sprint, and USAC Silver Crown cars. 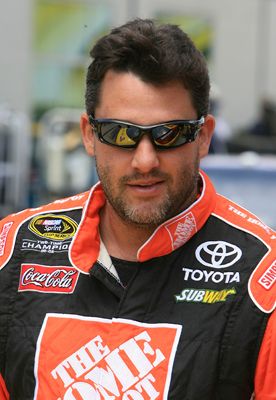 Born Anthony Wayne Stewart on May 20, 1971 in Columbus, Indiana, to parents Pam and Nelson Stewart, he he has one younger sister named Natalie. Stewart was educated at Columbus North High School and De La Salle College. He got his first competitive go kart in Westport, Indiana in 1979, and won his first championship in 1980. He is engaged to NHRA drag racer Leah Pruett.

Tony Stewart Facts:
*He was born on May 20, 1971 in Columbus, Indiana, USA.
*He started racing in Go-Karts.
*He started racing in the Winston Cup series (now called the Sprint Cup series) in 1999.
*He won the 2011 Sprint Cup Championship, beating Carl Edwards.
*He became the first person to win Winston Cup Championship and The Nextel Cup Championship.
*He is the only driver in history to win a championship in both IndyCar and NASCAR.
*He is the owner of various open-wheel short track racing cars, most of them being sponsored by Chevrolet since 2007.
*He also owns and drives dirt super late models.
*Visit his official website: www.tonystewart.com
*Follow him on Twitter, Facebook and Instagram.