Topher Grace is an American actor. He is best known for roles such as Eric Forman in the Fox sitcom That ’70s Show, Eddie Brock / Venom in Sam Raimi’s film Spider-Man 3, Pete Monash in Win a Date with Tad Hamilton!, Carter Duryea in In Good Company, Edwin in Predators, Getty in Interstellar, Adrian Yates in American Ultra, and David Duke in Spike Lee’s film BlacKkKlansman. He has also appeared in the films Traffic, Mona Lisa Smile, Valentine’s Day, Take Me Home Tonight, The Big Wedding, War Machine, and Breakthrough. 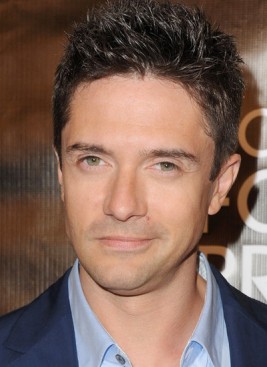 Born Christopher John Grace on July 12, 1978 in New York, New York, to parents Patricia and John Grace, he is of Irish, English, and Ashkenazi Jewish descent. Grace graduated in 1996 from Brewster Academy in Wolfeboro, New Hampshire. He later attended the University of Southern California and the Massachusetts Institute of Technology. In January 2015, he became engaged to actress Ashley Hinshaw and married on May 29, 2016. They have a daughter together.

Topher Grace Facts:
*He was born on July 12, 1978 in New York, New York, USA.
*He played the main character, Eric Forman, on the long-running Fox sitcom That ’70s Show.
*He played the villain Eddie Brock, Jr. in the movie Spider-Man 3.
*He hosted an episode of Saturday Night Live in 2005.
*He is friends with Laura Prepon, Ashton Kutcher, Mila Kunis, and Wilmer Valderrama.
*His acting mentors were Kurtwood Smith and Debra Jo Rupp.
*He enjoys playing tennis and even considered doing it professionally. He also enjoys soccer.
*He is childhood friend of Dave Karger.
*He has a border terrier dog named Max.
*He is the nephew of Susan Grace.
*Follow him on Twitter, Facebook and Instagram.