Tori Spelling is an American actress, writer and television personality. She is best known for her portrayal of Donna Martin on the television series Beverly Hills, 90210, which she played from 1990 to 2000. Other notable acting roles include Stacey Lockwood in A Friend to Die For, Carol Cartman in A Carol Christmas, Marci in The Mistle-Tones, Laurel Lewisohn in Mother, May I Sleep with Danger? (1996), Katherine in Trick, Raye Martin in The Last Sharknado: It’s About Time, Alex Monday in Scary Movie 2, Julie Lewisohn in Mother, May I Sleep with Danger? (2016), Lesly in The House of Yes, Susan in Cthulhu, Alex Golski in Kiss the Bride, and April in Izzie’s Way Home. In March 2008, Spelling released her autobiography, sTori TELLING, which debuted on top of the New York Times Best Seller list and was named the best celebrity autobiography of 2009. Born Victoria Davey Spelling on May 16, 1973 in Los Angeles, California, to parents Candy and Aaron Spelling, she has a younger brother named Randy. She was educated at Beverly Hills High School in Beverly Hills, California, and Harvard-Westlake School. She has been married to Dean McDermott since May 7, 2006. They have five children; Liam, Stella, Hattie, Finn and Beau. She was previously married to actor and playwright Charlie Shanian from 2004 to 2006. 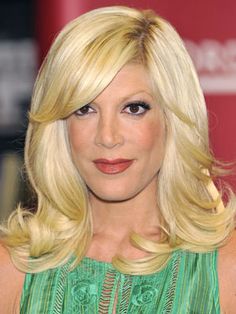 Tori Spelling Facts:
*She was born on May 16, 1973 in Los Angeles, California, USA.
*Her birth name is Victoria Davey Spelling.
*She is the goddaughter of Dean Martin and Barbara Stanwyck.
*Played Donna Martin on the TV series Beverly Hills, 90210 from 1990 to 2000.
*She has a tattoo of a rose on her left ankle.
*Visit her official website: www.torispelling.com
*Follow her on Twitter, Facebook and Instagram.