Travis Burns is an Australian actor and model. He is best known for his portrayal of Tyler Brennan on the Australian soap opera Neighbours. He previously played Chase Robertson in the American action-drama television series, SAF3 (2013). He has also starred in the films Sunrise in Heaven, A Christmas Princess, The Wrong Boy Next Door and the highly anticipated Dreamcatcher. 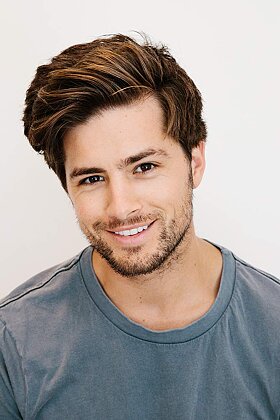 Born Travis Robert Burns on April 23, 1991 in Bacchus Marsh, Australia, he is of English and German descent. His father a tradesman and his Mother is a hairdresser, and has one sister and two nephews. Burns graduated from Bacchus Marsh College in 2008 and studied at Photographic Imaging College for two years, graduating with a Bachelors of Photographic Imaging. He first achieved fame with his role in the American action-drama television series, SAF3 (2013). He married model, actress and fellow Neighbours star, Emma Lane on December 16, 2017.

Travis Burns Facts:
*He was born on April 23, 1991 in Bacchus Marsh, Australia.
*He has English and German ancestry.
*Growing up, he played and excelled in basketball, football, baseball and swimming.
*He signed with Australia’s number 1 modeling agency, Chadwick Models, in 2011.
*His first acting role was in the CW drama series SAF3 in 2013.
*He played Tyler Brennan in the long-running television soap opera Neighbours from 2015 to 2018.
*Follow him on Twitter, Facebook, YouTube and Instagram.