Tucker Carlson is an American news anchor, pundit, columnist, and political commentator who works for Fox News. He is also co-founder and former editor-in-chief of The Daily Caller and host of MSNBC’s Tucker. He’s also co-host of CNN’s Crossfire and host of Tucker Carlson Tonight. As a magazine and newspaper journalist, he has written for The New York Times, The New Republic, The Daily Beast, Esquire, and The Weekly Standard. Born Tucker Swanson McNear Carlson on May 16, 1969 in San Francisco, California, USA, to Lisa McNear and Richard Warner “Dick” Carlson, he has one younger brother named Buckley Swanson Peck Carlson. His a former Los Angeles news anchor and U.S. ambassador to the Seychelles, who was also president of the Corporation for Public Broadcasting and director of Voice of America. He attended and graduated from Trinity College, where he studied history. He is married to Susan Andrews, with whom he has four children: Lillie, Hopie, Dorothy, and Buckley. 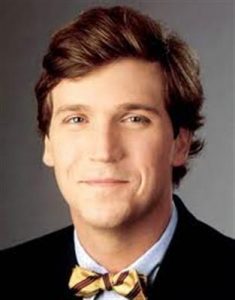 Tucker Carlson Facts:
*He is the son of Lisa McNear and Dick Carlson, a journalist.
*He is the founder and editor in chief of The Daily Caller.
*He is an Episcopalian.
*He was known for wearing bow ties.
*Follow him on Twitter and Facebook.