Val Kilmer is an American actor who became known for his roles in Top Secret!, Real Genius, Top Gun and the 1988 fantasy film Willow. He played Batman in the 1995 film Batman Forever. His other notable works include The Doors, Tombstone, True Romance, Heat, The Saint, Red Planet and The Salton Sea. Born as Val Edward Kilmer on December 31, 1959 in Los Angeles, California, to Gladys and Eugene Kilmer, he belongs to English, French, Cherokee Native American, German, Swedish and Scots-Irish descent. He attended Berkeley Hall School, a Christian Science school in Los Angeles, until ninth grade. He attended Chatsworth High School, and also attended the Hollywood Professional School. At age 17, he became the youngest person at the time to be accepted to Julliard’s Drama Division. He was married to actress Joanne Whalley in 1988, and the couple divorced in 1996. They had two children: a daughter, Mercedes and a son, Jack. 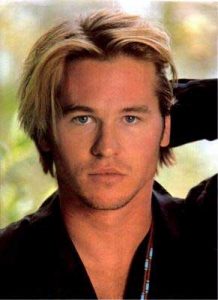 Val Kilmer Facts:
*His is the older brother of Wesley and younger brother of Mark.
*His parents got divorced when he was 8 years old.
*He is the only blonde actor to have played Bruce Wayne/Batman.
*His hobbies include scuba diving and traveling.
*He is good friends with musician David Crosby and actor Frank Whaley.
*Visit his official website: www.valkilmer.com
*Follow him on Twitter, Facebook, YouTube and Instagram.