Vanessa Hessler is an Italian-American model and actress. She has appeared in campaigns for many important fashion houses such as GUESS, Calvin Klein, L’Oréal, Giorgio Armani, and Ferrero SpA. She became the face of the DSL brand “Alice” in both France and Germany. Hessler made her debut as a TV show host at the Festival di Sanremo with Claudia Cedro, Francesca Lancini, and Marta Cecchetto in March 2006. She appeared in the 2005 film Christmas in Miami, along with Christian De Sica. She also played Princess Irina in the 2008 Italian film, Asterix at the Olympic Games/Astérix aux Jeux Olympiques. Born on January 21, 1988 in Rome, Lazio, Italy, her father, John Hessler, is an American citizen with German ancestry and her mother, Gabriella Hessler, is of Italian descent. She lived in Rome until she was eight, and then moved to Washington D.C., where she lived until 2002, and then she returned to Italy to work as a model. She was discovered while she was walking through the street of Rome’s city center by a modeling agent. She is married to Gianni Nunnari, with whom she has one daughter, Caterina. 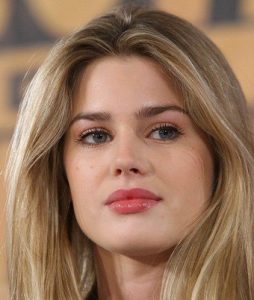 Vanessa Hessler Facts:
*She was born on January 21, 1988 in Rome, Lazio, Italy.
*Her father (John) is an American from Washington, D.C., and has German ancestry. Her mother (Gabriella) is Italian.
*She appeared on several magazine covers in France, Germany, and Italy.
*She was ranked #92 in AskMen.com’s “Top 99 Most Desirable Women of 2006”.
*Fashion Model Directory named her Model of the Month in May 2009.
*She walked for the Fall 2010 Prada show in Milan in February 2010.
*She speaks Italian, English and French fluently.
*Visit her official website: www.vanessahessler.it
*Follow her on Twitter, YouTube, Facebook and Instagram.