Vincent Kompany is a Belgian former professional footballer who played as an attacking midfielder. He played for Anderlecht, Hamburger SV, Manchester City and the Belgium national team. He is the current manager of Belgian club RSC Anderlecht. Born Vincent Jean Mpoy Kompany on April 10, 1986 in Uccle, Belgium, to parents Jocelyne and Pierre Kompany, he has an older sister named Christel, and a brother, François, who is a fellow footballer. He is married to Carla Higgs with whom he has two sons and a daughter. 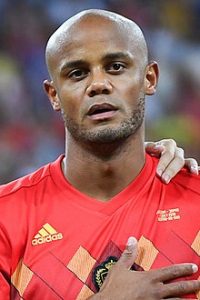 Vincent Kompany Facts:
*He was born on April 10, 1986 in Uccle, Belgium.
*He started his professional career at Anderlecht.
*He joined Manchester City in 2008.
*He became captain for both Manchester City and the Belgium national team in 2011.
*He helped Manchester City to a Premiere League title run in 2011-12, the club’s first title in 44 years.
*He was named the Premier League Player of the Season in 2012.
*He retired from professional football in August 2020.
*Visit his official website: www.vincent-kompany.com
*Follow him on Twitter, Facebook, Pinterest and Instagram.