Xavier Samuel is an Australian actor who has starred in such films as Adore, September, Further We Search, Newcastle, The Loved Ones, Frankenstein, and A Few Best Men. He also played Riley Biers in The Twilight Saga: Eclipse and Billy in Spin Out. 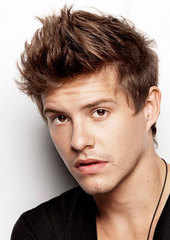 Born on December 10, 1983 in Hamilton, Victoria, Australia, to parents Maree and Clifford Samuel, Xavier grew up in Adelaide, South Australia and graduated from Rostrevor College in 2001. He attended Flinders University Drama Centre in 2005 where he played Hamlet in the graduate production. Samuel’s first role in show business was on McLeod’s Daughters (2003). He dated former Miss Europe Shermine Shahrivar.

Xavier Samuel Facts:
*He was born on December 10, 1983 in Hamilton, Victoria, Australia.
*He has an older sister named Bridget and younger brother named Benedict.
*He made his debut on the Australian TV show McLeod’s Daughters in 2003.
*He is good friends with Bryce Dallas Howard.
*He is a supporter of the Adelaide Football Club in the Australian Football League.
*Visit his official website: www.xavier-samuel.net