Cordae is an American rapper, singer, and songwriter who came to prominence after releasing remixes of popular songs, such as “My Name Is” by Eminem, and “Old Niggas” which was a response to the song “1985” by J. Cole. Cordae’s debut studio album, The Lost Boy was released on July 26, 2019 to widespread acclaim and received two nominations for Best Rap Album and Best Rap Song for the single “Bad Idea” at the 62nd Grammy Awards. He was part of the YBN collective before their disbandment in August 2020. He collaborated with YBN Nahmir on the 2018 track “Pain Away.” 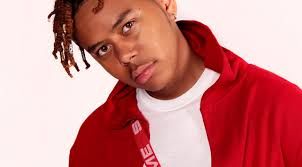 Cordae Facts:
*Born on August 26, 1997 in Raleigh, North Carolina, he moved to Suitland, Maryland when he was 10.
*He began writing raps around the age of fifteen.
*He was a member of the YBN collective.
*He released his mixtape I’m So Anxious in 2016.
*He can play the piano and keyboards.
*His top five favorite rappers are Jay-Z, Nas, 2Pac, The Notorious B.I.G., and Big L.
*Cordae states that his influences include Nas, Jay-Z, Kid Cudi, Kanye West, Eminem, Capital Steez, Lil Wayne, J. Cole, Big L, Travis Scott and Kendrick Lamar.
*Currently, Cordae is dating tennis player Naomi Osaka.
*Follow him on YouTube, Facebook and Instagram.