Charlie Puth is an American singer, songwriter and record producer who wrote, co-produced, and was featured on a song with Wiz Khalifa, “See You Again”. In 2015, Puth signed with Atlantic Records and released his debut single “Marvin Gaye”, which features American singer-songwriter Meghan Trainor. Puth’s other notable hit songs include “Attention,” “How Long,” “One Call Away,” and “We Don’t Talk Anymore” featuring Selena Gomez. 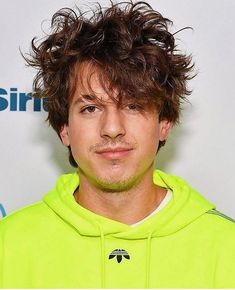 Born Charles Otto Puth Jr. on December 2, 1991 in Rumson, New Jersey, to parents Charles and Debra Puth, he has two younger siblings; a brother named Stephen and a sister named Mikaela. He is of German, Hungarian, and Italian descent on his father’s side, and of Ashkenazi Jewish descent on his mother’s side. He graduated from Rumson-Fair Haven Regional High School in 2010, and attended Berklee College of Music on a full scholarship. He briefly dated actress Halston Sage in 2018, then he dated singer Charlotte Lawrence in 2019.

Charlie Puth Facts:
*He was born on December 2, 1991 in Rumson, New Jersey, USA.
*Growing up, he was bullied at school.
*He majored in jazz piano and minored in classical from Manhattan School of Music Pre-College.
*He launched his CharliesVlogs YouTube channel in December 2009.
*He was signed by Ellen DeGeneres’ record label eleveneleven in October 2011.
*He was featured on a song with Wiz Khalifa, “See You Again” in 2015.
*He has a crush on Liza Soberano and Kendall Jenner.
*Visit his official website: www.charlieputh.com
*Follow him on Twitter, YouTube, SoundCloud, Facebook and Instagram.