Bec Hewitt is an Australian actress and singer who starred as Hayley Smith Lawson on the soap opera Home and Away from 1998 to 2005. In 2003, Hewitt released her debut album Bec Cartwright by East West Records through Warner Music. She has also guest starred in Water Rats, Police Rescue, and Roar. She has been on the cover of Total Girl magazine in the “Baby Animal Issue” two years in a row. 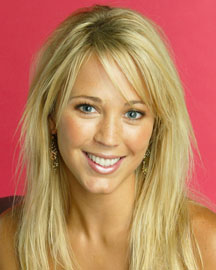 Bec Hewitt Facts:
*Born on July 23, 1983 in Sydney, Australia, she is the youngest of three children.
*She began performing at the age of 3.
*She started acting at the age of 5, appearing in TV commercials.
*She played Hayley Lawson in the soap opera Home and Away from 1998 to 2005.
*She is close friends with Australian actress/singer Delta Goodrem.
*She dated Johnny Brady from 2000 until 2004.
*Bec and Australian tennis player Lleyton Hewitt became engaged after only six weeks of dating; they married in July 2005.
*Visit her official website: www.lleytonandbechewitt.com
*Follow her on Instagram.