Chloe Lloyd is a British fashion model who appeared on the magazine covers of Elle Portugal and Norway in 2015. She has modeled for brands and designers like Maybelline, Schwarzkopf, NewYorker, Rubber B, and The Body Shop. She has also modelled for magazines such as Cosmopolitan, Brides, Marie Claire, Glamour, and Vogue. She is represented by Two Management (Los Angeles), Elite Models (Miami and New York), Unique Models (Denmark), and Iconic Management (Hamburg). 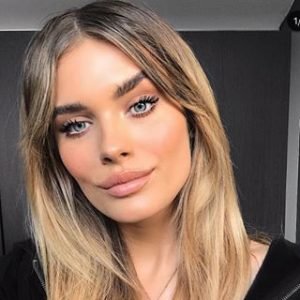 Born on October 2, 1992 in Crewe, Cheshire, England, to parents Melanie and Robert Lloyd, she has an older brother named Dean. Lloyd attended Ruskin High School and studied performing arts at South Cheshire College. In November 2014, she started dating boy band Union J member Josh Cuthbert. They got engaged in 2015, and wed in August 2018.

Chloe Lloyd Facts:
*She was born on October 2, 1992 in Crewe, Cheshire, England, UK.
*At at the age of 17, she beat thousands of models to clinch the title of Face of Bank.
*She began her professional career in 2010.
*She appeared on the magazine covers of Elle Portugal and Norway in June 2015 and October 2015 respectively.
*Her style icons are Olsen twins: Mary Kate and Ashley Olsen.
*She was featured in the 2012 music video for The Wanted’s song “I Found You”.
*She admires models Kate Moss and Rosie Huntington-Whiteley.
*Visit her official website: www.chloelloyd.co.uk
*Follow her on Twitter and Instagram.