Holly Holm is an American mixed martial artist, kickboxer and boxer who is widely considered to be one of the greatest female boxers of all time. Holm competes in the Ultimate Fighting Championship, and is the former UFC Women’s Bantamweight Champion, and a former professional boxer and kickboxer. She was a multiple-time world champion in boxing, defending her titles eighteen times in three different weight classes, and a two-time Ring magazine fighter of the year (2005, 2006). 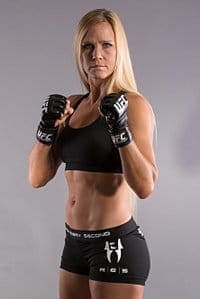 Born Holly Rene Holm on October 17, 1981 in Albuquerque, New Mexico, to parents Tammy and Roger Holm, she has two older brothers named Brian and Weston. Holm made her boxing debut January 2002 and made her professional debut as a kickboxer in June 2002. She was married to Jeff Kirkpatrick from 2012 to 2018.

Holly Holm Facts:
*She was born on October 17, 1981 in Albuquerque, New Mexico, USA.
*She got her start in aerobics at the University of New Mexico and was encouraged to try kickboxing by her coach Mike Winkeljohn.
*Holm’s father is a preacher, which earned her the nickname “The Preacher’s Daughter.”
*IFBA Fighter of the Year for 2006.
*WBAN Fighter of the Year for 2007 and 2010.
*She was named New Mexico Boxing Fighter of the Year six consecutive times from 2005 to 2010
*In 2014, Holm signed a deal to compete in Ultimate Fighting Championship.
*She was the first woman to defeat Ronda Rousey in the UFC, winning by a knockout head kick in the second round of UFC 193.
*She was inducted into the New Mexico Boxing Hall of Fame in June 2013.
*Her favorite place to be is in the gym.
*She is also a licensed Realtor.
*Visit her official website: www.hollyholm.com
*Follow her on Twitter, Facebook and Instagram.