Jamie Bamber is an English/American actor. Bamber is well known for his performances as Lee Adama in Battlestar Galactica, and Detective Sergeant Matt Devlin in Law & Order: UK. He played Lieutenant Archibald “Archie” Kennedy in the popular ITV series Hornblower and was a regular on the British series Ultimate Force and Peak Practice. In 2013, Bamber appeared in the TNT medical drama Monday Mornings, and in 2014, in the Sky 1 drama The Smoke. Born Jamie St John Bamber Griffith on April 3, 1973 in Hammersmith, London, United Kingdom to an American father and an Irish mother, he has five brothers and one sister, actress Anastasia Griffith. He was educated at St Paul’s School in London, and attended St. John’s College and the London Academy of Music and Dramatic Art (LAMDA). Bamber is married to English actress and singer Kerry Norton, and they have three daughters: Isla Elizabeth Angela Griffith, and twins Darcy and Ava. 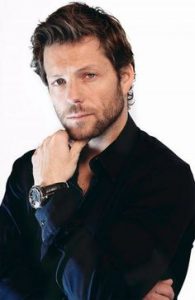 Jamie Bamber Facts:
*He was born on April 3, 1973 in Hammersmith, London, United Kingdom.
*His mother, Elizabeth Bamber, is Northern Irish; father, Ralph, is an American lawyer.
*His younger sister is actress Anastasia Griffith.
*He has dual British and American citizenship through his American father and Northern Irish mother.
*He is fluent in English, French, and Italian.
*He is best friends with Ioan Gruffudd.
*Interests: Skiing, Dancing, Rap-Music, Rugby, Golf, Horseback-riding
*Follow him on Twitter and Instagram.