English actor, singer and model who is best known for starring as Anthony Hope in Sweeney Todd: The Demon Barber of Fleet Street, Caius in The Twilight Saga, the young Gellert Grindelwald in Harry Potter and the Deathly Hallows – Part 1 and Fantastic Beasts: The Crimes of Grindelwald, Jace Wayland in The Mortal Instruments: City of Bones and playwright Kit Marlowe in the short-lived series Will. He is also the lead singer of the band Counterfeit. 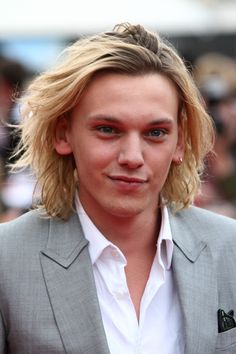 Born James Metcalfe Campbell Bower on November 22, 1988 in London, United Kingdom, to parents Anne and David Bower, his 4 times maternal great-grandfather was Sir John Campbell, the 7th Baronet of Ardnamurchan and Airds. He has a younger brother named Samuel, who plays guitar for Counterfeit. Jamie was educated at Bedales School, a co-educational independent school in Hampshire, and is a former member of the National Youth Music Theatre and the National Youth Theatre. He had an on-off romance with Lily Collins. From 2014 to 2015, he dated model Matilda Lowther. In 2018, Jamie started dating Tattoo artist Ruby Quilter.

Jamie Campbell Bower Facts:
*He was born on November 22, 1988 in London, United Kingdom.
*He worked as a part-time model for the British company Select Model Management.
*He became the lead singer of the band The Darling Buds.
*He won National Movie Award in the category of One to Watch: Brits Going Global in 2011.
*He appeared in the music video “Never Let Me Go” by Florence + The Machine in 2012.
*He was ranked #9 in Glamour’s list of “50 Sexiest Men” of 2013.
*In 2015, he founded the Counterfeit band and serves as the lead vocalist and guitarist of the band.
*He is a fan of Arcade Fire and Clement Marfo.
*He is good friends with Edi Gathegi, Lily Collins and Kevin Zegers.
*Visit his official website: www.therealcounterfeit.com
*Follow him on Twitter and Instagram.