Janhvi Kapoor is an Indian actress who appears in Hindi films. She made her acting debut in 2018 with the romantic drama film Dhadak, and starred in the Netflix films Ghost Stories and Gunjan Saxena: The Kargil Girl. In 2021, Janhvi starred in Good Luck Jerry, a Hindi adaptation of the 2018 Tamil film Kolamavu Kokila, produced by Aanand L. Rai. 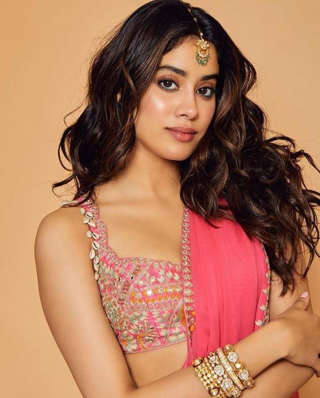 Born on March 6, 1997 in Mumbai, Maharastra, India, to parents Sridevi and Boney Kapoor, she has one younger sister, Khushi, and two half siblings, actor Arjun Kapoor and Anshula Kapoor. She is the niece of actors Anil Kapoor and Sanjay Kapoor. Janhvi was educated at Dhirubhai Ambani International School in Mumbai. She took an acting course from Lee Strasberg Theatre and Film Institute in California before making her film debut.

Janhvi Kapoor Facts:
*She was born on March 6, 1997 in Mumbai, Maharastra, India, to the actress Sridevi and the film producer Boney Kapoor.
*She was named after Urmila Matondkar’s character Janhvi from the film Judaai.
*She is the niece of actors Anil Kapoor and Sanjay Kapoor.
*She made her acting debut in 2018 with the romantic drama film Dhadak.
*She won the Zee Cine Award for Best Female Debut.
*She played the titular role in the 2020 Hindi-language biographical drama film, Gunjan Saxena: The Kargil Girl.
*Follow her on Instagram.