Jon Hamm is an American actor and producer who starred as Don Draper in the AMC drama series Mad Men from 2007 to 2015, for which he earned a Golden Globe Award for Best Actor in a Television Series – Drama in 2008 and again in 2016, and the Primetime Emmy Award for Outstanding Lead Actor in a Drama Series in 2015. He is also notable for his comedic roles in various sitcoms including his guest starring roles in 30 Rock, Unbreakable Kimmy Schmidt, Parks and Recreation, Curb Your Enthusiasm and Wet Hot American Summer: First Day of Camp. He has appeared in Ben Affleck’s crime thriller The Town, the Paul Feig comedy Bridesmaids, the romantic ensemble Friends with Kids, the sports drama Million Dollar Arm, the action comedy Keeping Up with the Joneses, and Edgar Wright’s action film Baby Driver. He has also starred in the political thriller Beirut, the comedy Tag, the thriller Bad Times at the El Royale, the political drama The Report, the space drama Lucy in the Sky, and Clint Eastwood’s drama Richard Jewell. He has also provided his voice for the animated films Shrek Forever After and Minions, along with the second season of the FX series Legion. He has also hosted and appeared on Saturday Night Live. 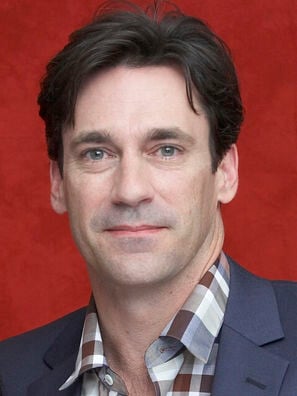 Jon Hamm Facts:
*Born on March 10, 1971 in St. Louis, Missouri, his mother died when he was ten, and his father ten years later.
*He is of German, English, and Irish descent.
*He graduated in 1993 with a Bachelor of Arts degree in English.
*He was named one of Salon.com’s Sexiest Man Living in 2007 and one of People magazine’s Sexiest Men Alive in 2008.
*Entertainment Weekly named him one of their Entertainers of the Year in both 2008 and 2010.
*He won GQ’s “International Man” award in September 2010.
*He is very close friends with Paul Rudd.
*He is an animal rescue advocate.
*His role models are Greg Kinnear, Sam Elliott and Jeff Bridges.
*He was in a relationship with actress and screenwriter Jennifer Westfeldt from 1997 until 2015.
*He is an avid St. Louis Cardinals baseball fan and narrated the 2011 Official World Series film.
*He became a cricket fan after being introduced by Daniel Radcliffe while making ”A Young Doctor’s notebook”.