Josh Cuthbert is an English singer, songwriter and model. He is best known as a former member of the Top British boy band, Union J, who finished fourth on The X Factor in 2012. He also starred in the West End rendition of Chitty Chitty Bang Bang. 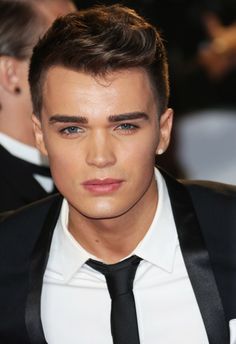 Born Joshua Thomas John Cuthbert on July 28, 1992 in Ascot, United Kingdom, to parents Kathryn Cuthbert and Graham Browne, he has four younger half siblings, Victoria, Callum, Sophie and Lucy. Cuthbert was educated at Charters School in Berkshire and The Sixth Form College Farnborough. In November 2014, Cuthbert began dating model Chloe Lloyd and they got engaged in 2015. They tied the knot in August 2018.

Josh Cuthbert Facts:
*He was born on July 28, 1992 in Ascot, United Kingdom.
*He used to be a footballer, playing as a goalkeeper, but had to quit after damaging his thumb in a shooting accident.
*Before auditioning for the The X Factor in 2012, he worked as an I.T. salesperson.
*He was one of the three original members of Triple J.
*He was signed to Sony Music with Union J in 2012.
*He signed a modelling contract with modeling agency Two Management in February 2015.
*Follow him on Twitter and Instagram.