Kerry Norton is an English actress and singer who played the leading role of Anne Alstein in The Screwfly Solution. She is also known for her role as Maxi Purvis in the ITV series Bad Girls. Norton has made several guest appearances on Battlestar Galactica as paramedic Layne Ishay. Born on October 11, 1973 in Sunbury-on-Thames, United Kingdom, she has a brother named Matthew, and two sisters, Jackie and Lorraine. She has been married to Jamie Bamber since September 20, 2003. They have three daughters: Isla Elizabeth Angela Griffith, and twins Ava and Darcy. 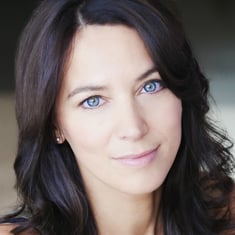 Kerry Norton Facts:
*She was born on October 11, 1973 in Sunbury-on-Thames, United Kingdom.
*She was a gymnast before becoming an actress.
*She plays the guitar and the piano.
*In 2010, Norton appeared in a Fairy Liquid television advertisement.
*She met her future husband, actor Jamie Bamber, on the set of the film “Devil’s Tattoo.”.