American actor who rose to fame during the late 1990s and early 2000s, having appeared in several independent films, and later mainstream Hollywood films, including the Scream trilogy of horror films, Ransom, Phantoms, The Sum of All Fears, The Manchurian Candidate, The Omen, X-Men Origins: Wolverine, Taking Woodstock, Salt, Goon, Pawn Sacrifice, and Spotlight. He has also done voice work in My Little Pony: The Movie, Isle of Dogs, and Spider-Man: Into the Spider-Verse. Also a stage actor, Liev won a Tony Award for Best Featured Actor for his role in Glengarry Glen Ross. He made his directorial with Everything Is Illuminated (2005), based on the 2002 novel of the same name. 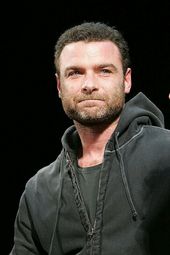 Born Isaac Liev Schreiber on October 4, 1967 in San Francisco, California, to parents Heather and Tell Schreiber, Liev grew up in the Lower East Side neighborhood of New York City. He graduated from Friends Seminary High School in Manhattan, and attended London’s Royal Academy of Dramatic Art, Hampshire College and graduated with a Master’s degree from the Yale School of Drama in 1992. From 2005 to 2016, Liev dated Naomi Watts with whom he has two sons named Alexander and Samuel.

Liev Schreiber Facts:
*He was born on October 4, 1967 in San Francisco, California, USA.
*His mother named him after her favorite author, Leo Tolstoy whose Russian name was Lev.
*He spent most of his childhood years in Lower East Side in New York.
*He had his first on-camera role in the 1994 film Mixed Nuts.
*He is good friends with Hugh Jackman and Dustin Hoffman.
*He supported Senator Bernie Sanders for President in the 2016 U.S. presidential election.
*He has a dog named Scout.
*Follow him on Twitter and Instagram.