American singer and songwriter Lisa Marie Presley was best known as the only daughter of the King of Rock and Roll Elvis Presley and the ex-wife of the King of Pop Michael Jackson. Her debut album, To Whom It May Concern, was reached No. 5 on the Billboard 200 albums chart in 2003. Her hit singles include, “Dirty Laundry”, “In the Ghetto”, and “Lights Out”. Born in Memphis, Tennessee, she was the daughter of Elvis and Priscilla Presley. Her ancestry includes German, Norwegian, English, Scottish, Irish, along with some French, and remote Dutch and Danish. She was the mother of four children, Riley, Benjamin, Harper Vivienne, and Finley Aaron. She was married to Nicolas Cage, Michael Jackson, Danny Keough, and Michael Lockwood. 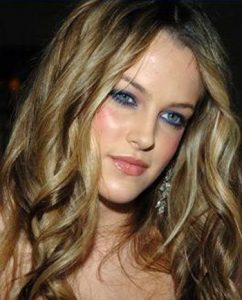 Lisa Marie Presley Facts:
*She was born exactly after nine months of her parents marriage.
*She inherited the Presley lip curl from her father.
*She was good friends with singer Pink, Michael Jackson’s sisters, Rebbie Jackson and Janet Jackson.
*Follow her on Twitter, Facebook, YouTube, and Myspace.