Maksim Chmerkovskiy is a Ukrainian-American Latin–ballroom dance champion, choreographer, and instructor. He is best known as one of the professional competitors on the American television series Dancing with the Stars, on which he first appeared in season two. In May 2014, Chmerkovskiy, paired with Olympic ice dancer Meryl Davis, won his first Dancing with the Stars title. He has also starred in the Broadway productions of dance shows Burn the Floor and Forever Tango. 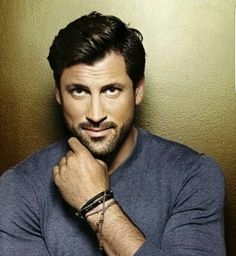 Born Maksim Aleksandrovich Chmerkovskiy on January 17, 1980 in Odesa, Ukraine, to parents Larisa and Aleksandr “Sasha” Chmerkovskiy, his younger brother, Valentin Chmerkovskiy, is also a professional dancer. He has been married to Peta Murgatroyd since July 8, 2017. They have a son together. He was previously engaged to fellow dancer Karina Smirnoff and he dated model Kate Upton.

Maksim Chmerkovskiy Facts:
*He was born on January 17, 1980 in Odesa, Ukraine.
*He started dancing at the age of 4.
*As a child, he wanted to be an athlete – a soccer player or a swimmer.
*He is the owner of Rising Stars Dance Academy (RSDA). Apart from this, Chmerkovskiy also owns three more dance studios in New York City.
*His father is Jewish and his mother is Christian.
*His family immigrated to Brooklyn, New York in 1994.
*He is the owner of the company ‘Maksim Chmerkovskiy Productions’.
*Visit his official website: www.makschmerkovskiy.com
*Follow him on Twitter, Facebook and Instagram.