Marilyn Manson is an American singer-songwriter, record producer, actor, painter, and writer. He is best known as the lead vocalist of the band of the same name, which he co-founded with guitarist Daisy Berkowitz in 1989. Manson released his first EP, titled Smells Like Children, on October 24, 1995. The EP was certified Platinum by the Recording Industry Association of America, and was spearheaded by its sole single, a cover of “Sweet Dreams (Are Made of This)”, originally written and performed by Eurythmics. The song’s music video became a staple on MTV and helped to establish the band in the mainstream. His other hit singles includes “The Dope Show” and “The Beautiful People.” Manson was nominated for a Grammy Award for Best Metal Performance for “mOBSCENE” and became known for theatrical concerts and his disturbing, horror-inspired fashion, such as wearing a decorated contact lens in one eye, black leather pants, and heavy stage makeup. As an actor, Manson made his film debut in David Lynch’s Lost Highway (1997), and has since appeared in a variety of minor roles and cameos. 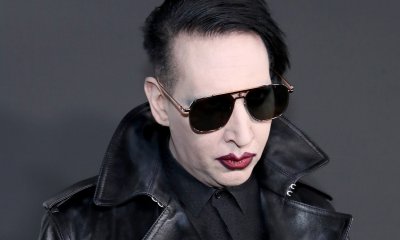 Born Brian Hugh Warner on January 5, 1969 in Canton, Ohio, to parents Barbara and Hugh Angus Warner, he is of German and English descent. Manson graduated from high school, and studied journalism and theater at the local community college called Broward. Manson was once engaged to actress Rose McGowan. He married burlesque dancer Dita Von Teese in December 2005, but they divorced in December 2007 amid rumors of the rocker’s affair with actress Evan Rachel Wood. He was later briefly engaged to Wood. After their breakup, he began dating Lindsay Usich in 2010; the couple wed in 2020.

Marilyn Manson Facts:
*He was born on January 5, 1969 in Canton, Ohio, USA.
*His stage name was formed from the names of actress Marilyn Monroe and murderer, Charles Manson
*He released his debut studio album, Portrait of an American Family in 1994.
*Willy Wonka & the Chocolate Factory (1971) is his favorite movie.
*He moved to Hollywood in hopes of meeting actress Rose McGowan.
*He is good friends with Eric Szmanda.
*In his free time he paints and writes.
*He is a big fan of Absinthe.
*Visit his official website: www.marilynmanson.com
*Follow him on Twitter, YouTube, Facebook and Instagram.