Sandara Park is a South Korean singer, actress and television presenter. She is best known as a former member of the South Korean girl group 2NE1, which became one of the most popular and successful girl groups worldwide before her departure from the group in 2016. The group released the song “Please Don’t Go,” which was #6 on the Gaon Chart in 2009. As an actress, Park has appeared in Volta, Can This Be Love, Super Noypi, One Step, Cheese in the Trap, SCQ Reload: Ok Ako!, Komiks Presents: Machete, Crazy for You, Abt Ur Luv, and The Return of Iljimae. Sandara became a judge on Pinoy Boyband Superstar in 2016. 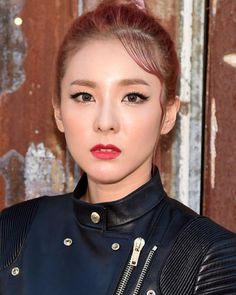 Born on November 12, 1984 in Busan, South Korea, to parents Ik-Su Park and Kyung Ran-Kim, she has two younger siblings: Park Sang-Hyun, who is a former member of K-pop boy group MBLAQ, and a younger sister named Durami. She dated Filipino actor, Joseph Bitangcol from 2004 to 2007.

Sandara Park Facts:
*She was born on November 12, 1984 in Busan, South Korea.
*She debuted as a member of 2NE1 with YG Entertainment members Minzy, CL, and Park Bom.
*The second oldest member of 2NE1 after Park Bom.
*Her younger brother Thunder was part of the boy band MBLAQ.
*She is fluent in Tagalog and English, and can speak conversational Japanese and Mandarin.
*Follow her on Twitter and Instagram.