Sonam Kapoor, born June 9, 1985, is an Indian actress whose film appearances include Prem Ratan Dhan Payo, I Hate Luv Storys, Bhaag Milkha Bhaag, Players, Saawariya, and Raanjhanaa. She is the only Indian actress who was featured as the cover girl of the international Prestige. The daughter of actor Anil Kapoor, Sonam is one of the highest-paid actresses in the industry. She is married to the businessman, Anand Ahuja. 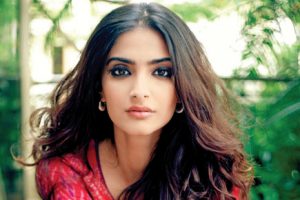 Sonam Kapoor Facts:
*She is the eldest daughter of Anil Kapoor (father) and Sunita Kapoor (mother).
*She is trained in Kathak, classical music, and Latin dance.
*She used to weigh around 90 kgs before her first film Saawariya.
*She is the only Indian actress who was featured as the cover girl of the international Prestige.
*She enjoys reading, shopping, writing, playing squash and basketball, video games and painting.
*She supports the raising awareness of breast cancer and LGBT rights.
*She speaks Hindi, English, Punjabi, Urdu, Sindhi, and Marathi.
*People Magazine named her “Best Dressed Celebrity” in 2009.
*Follow her on Twitter, Facebook and Instagram.