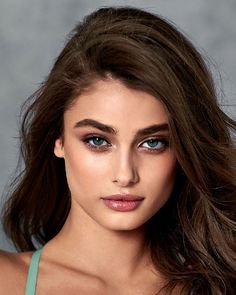 Born Taylor Marie Hill on March 5, 1996 in Palatine, Illinois, to parents Jennifer and David Hill, she has two sisters named Logan Rae and Mackinley, and a brother named Chase. Hill graduated from Pomona High School in Arvada at the age of 16. She was discovered at age 14 by an agent-photographer at a dude ranch in Granby, Colorado in 2000 near her home in Arvada, Colorado. She made her debut Victoria’s Secret Fashion Show in 2014.

Taylor Hill Facts:
*She was born on March 5, 1996 in Palatine, Illinois, USA.
*Before becoming a model, she was a gymnast.
*She walked the Victoria’s Secret Fashion Show for the first time in 2014 at age 18.
*She became a Victoria’s Secret Angel in April 2015.
*She became an ambassador for Lancôme in July 2016.
*She idolizes Gisele Bundchen and Adriana Lima.
*She is left-handed.
*Follow her on Twitter, Facebook and Instagram.