Ian Somerhalder is an American actor. He is best known for starring as Boone Carlyle in the TV drama Lost, Damon Salvatore in The CW’s supernatural drama The Vampire Diaries and Dr. Luther Swann in Netflix’s sci-fi horror series V Wars. Somerhalder won a Screen Actors Guild Award in 2006 for Outstanding Performance by an Ensemble in a Drama Series for Lost. He played bisexual character Paul Denton in Roger Avary’s adaptation of Bret Easton Ellis’ novel, The Rules of Attraction (2002). His other notable works include Young Americans, Smallville, and Tell Me You Love Me. 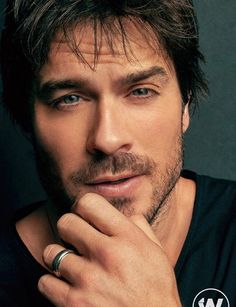 Born Ian Joseph Somerhalder on December 8, 1978 in Covington, Louisiana, to parents Edna and Robert Somerhalder, he has an older brother named Robert, and a younger sister named Robyn. Somerhalder attended St. Paul’s, a private Catholic school in Covington. He married actress Nikki Reed in April 2015; they welcomed a daughter named Bodhi in July 2017.

Ian Somerhalder Facts:
*Born on December 8, 1978 in Covington, Louisiana, he grew up with his mother, whom he has described as being “very spiritual”.
*He started modeling at age 10, modeled for Calvin Klein, Dolce & Gabanna, Gucci, Versace and Guess.
*He was the face of Guess? for two consecutive Fall seasons.
*He was named one of the ‘sexiest men’ in Glamour’s “50 Sexiest Men of 2010” list.
*Sean Penn is his favorite actor.
*Ian’s favorite film is The Graduate (1967).
*He and his siblings own a pizza parlor in Idaho.
*He has his own foundation called “Ian Sommerhalder Foundation”.
*His favorite sport is Football. He also played varsity soccer and baseball.
*He enjoys reading, music, yoga and traveling.
*He dated The Vampire Diaries co-star, Nina Dobrev from 2010 to 2013.
*Follow him on Twitter, Facebook and Instagram.