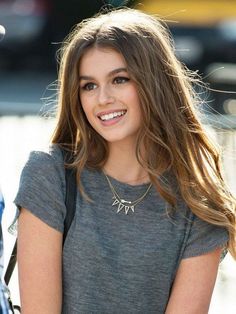 Born on September 3, 2001 in Los Angeles, California, she is the daughter of supermodel Cindy Crawford and businessman and model Rande Gerber. Her older brother, Presley Walker Gerber, is an aspiring photographer. She is of Russian Jewish descent on her father’s side, and of English, Scottish, Irish, Danish, and German descent on her mother’s side. Gerber landed her first modeling gig with Versace’s junior line Young Versace when Gerber was 10 years old. She signed with IMG Models and did modeling for Teen Vogue at 13. She has been in a relationship with Australian actor Jacob Elordi since August 2020. She previously dated Pete Davidson in 2019.

Kaia Jordan Gerber Facts:
*She was born on September 3, 2001 in Los Angeles, California, USA.
*She was named after the Bob Marley song “Kaya.”
*She started modeling at 10 with Versace’s junior line Young Versace.
*She made her runway debut for Raf Simons’s Calvin Klein Collection at 16 years old in 2017.
*She debuted at Fashion Week 2018-2019.
*She received the Model of the Year Award at The Fashion Awards in 2018.
*She collaborated with Karl Lagerfeld to create the KarlxKaia collection in 2018.
*Daily Front Row named her as one of a group of high-profile investors who purchased W magazine, a fashion magazine. (August 2020)
*She is fluent in both English and French.
*Her fashion icon is Karlie Kloss.
*She has a dog named Milo.
*Follow her on Twitter, Facebook and Instagram.