Michael Clifford is an Australian singer-songwriter and musician, best known as the lead guitarist for the Australian pop rock band, 5 Seconds of Summer, alongside lead vocalist Luke Hemmings, bassist Calum Hood, and drummer Ashton Irwin. 5 Seconds of Summer is known for such hits as “She Looks So Perfect”, “Youngblood”, “Amnesia” and “Don’t Stop.” Their debut self-titled album peaked at #1 in 11 countries. Born Michael Gordon Clifford on November 20, 1995 in Quakers Hill, Australia, he is the only child of Karen and Daryl Clifford. He was educated at Norwest Christian College in Riverstone, New South Wales. He has dated Crystal Leigh and Geordie Gray. 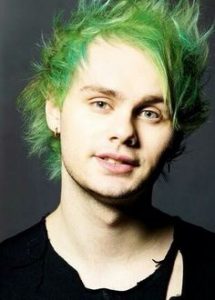 Michael Clifford Facts:
*Born on November 20, 1995 in Quakers Hill, Australia, he is the only child of his parents.
*His full name is Michael Gordon Clifford.
*Best known as a member of the Australian pop rock band, 5 Seconds of Summer.
*He met his future 5 Seconds of Summer bandmates while studying at Norwest Christian College.
*In June 2015, Clifford’s hair caught on fire during a performance at Wembley Arena.
*He has been diagnosed with anxiety and depression.
*Visit his band’s official website: www.5sos.com
*Follow him on Twitter, Pinterest, Facebook and Instagram.