Mila Kunis is a Ukrainian-born American actress, model and producer who starred as Jackie Burkhart on the sitcom That ’70s Show from 1998 to 2006. In December 1999, Kunis began voicing Meg Griffin on the Fox animated series Family Guy. Her notable film appearances include: Forgetting Sarah Marshall, Black Swan, Max Payne, The Book of Eli, Friends with Benefits, Oz the Great and Powerful, Ted, Bad Moms and its sequel, A Bad Moms Christmas. 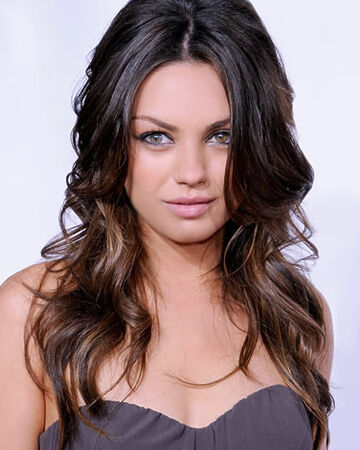 Born Milena Markovna Kunis on August 14, 1983 in Chernivtsi, Ukraine, to a Jewish family, her mother, Elvira, is a physics teacher, and her father, Mark Kunis, is a mechanical engineer. She has an older brother named Michael. Kunis’s family immigrated to Los Angeles, California, in 1991. She graduated from Fairfax Senior High School in June 2001, and attended the University of California, Los Angeles (UCLA) for a semester, and then transferred to Loyola Marymount University (LMU) in Los Angeles, California, before dropping out to continue her acting career. In July 2015, Kunis married actor Ashton Kutcher, with whom she has two children.