Riley Keough is an American actress and model. She is best known for her role as Christine Reade in the first season of the anthology series The Girlfriend Experience and her appearances in the films Jack & Diane, The Good Doctor and American Honey. Keough has also starred in such films as Yellow, Dixieland, Lovesong, Logan Lucky, Under the Silver Lake, Mad Max: Fury Road, Paterno, The Lodge, Earthquake Bird, Zola, and The Devil All the Time. She received an Independent Spirit Award nomination for Best Supporting Actress for her role in the 2016 film American Honey. 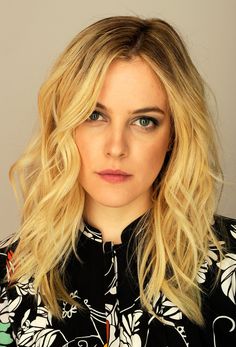 Born Danielle Riley Keough on May 29, 1989 in Santa Monica, California, she is the daughter of Lisa Marie Presley and Danny Keough, and granddaughter of Elvis Presley and Priscilla Presley. Her younger brother, Benjamin Storm Keough, died by suicide in July 2020. She also has two step-sisters, twins Harper and Finley, from her mother’s fourth marriage, to Michael Lockwood. Keough married stuntman Ben Smith-Petersen in February 2015.

Riley Keough Facts:
*She was born on May 29, 1989 in Santa Monica, California, USA.
*Her parents are Lisa Marie Presley and Danny Keough.
*Her parents divorced when she was age six, and her mother was briefly remarried to Michael Jackson.
*Her brother Benjamin died by suicide in July 2020.
*As a teenager, she did runway modeling for Dolce & Gabbana.
*She made her feature film debut at age 20, in the musical biopic The Runaways (2010).
*She was once engaged to English actor Alex Pettyfer.
*She is friends with actress Dakota Johnson.
*Follow her on Twitter and Instagram.